A mobile app that helps manage all aspects
of a household efficiently and delightfully.

For our master project, we want to focus on the uneven distribution of time and effort every family member devotes in doing chores. We found that usually there’s one person, usually women, in each household that naturally take on more responsibility in managing the household, even though they are just as busy as other family members at work. They feel unfair, unsatisfied, or overwhelmed, but find it hard to change the situation.

So, we ask ourself the question:

How might we help reduce the time and effort spent on organizing and distributing household tasks?

How can we get family members involved in the process?

After further defining the problem space, we design the final solution ChoreKit - A mobile app that helps manage all aspects of a household efficiently and delightfully. The main features are: 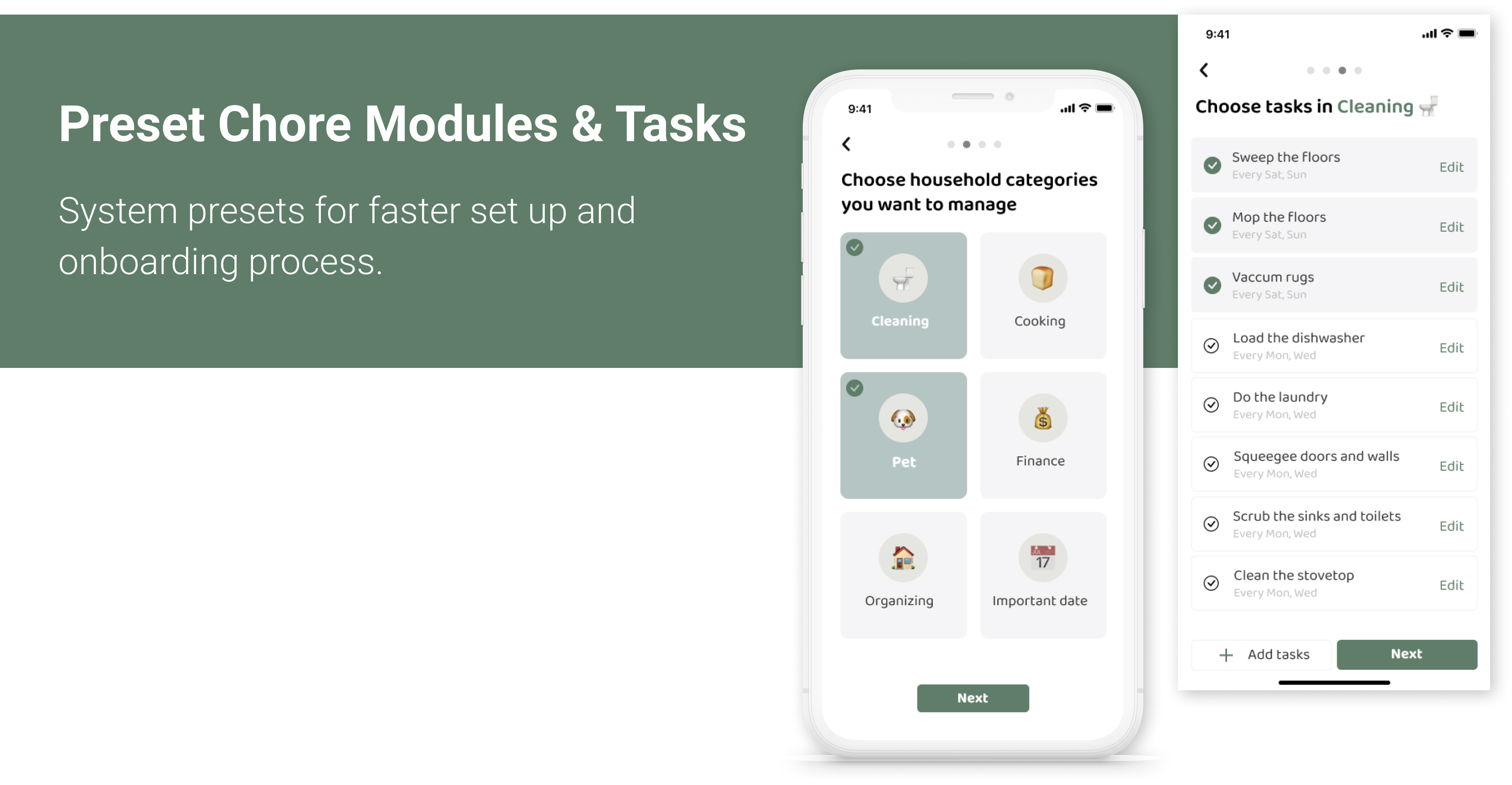 During the research phase, I planned and designed online survey and conducted remote interview sessions to gather user needs. During the design phase, I actively contributed in the brainstorming sessions and created wireframes, high-fidelity user interfaces. I also revised the user flow and built an interactive prototype within Figma.
I then conducted several usability testing sessions to acquire design implications. Based on design implications, I iterated the design to continue improving our solution.

We started the project with the idea of helping young couples in China deal with conflicts from division of labor in household, which we did for following motivations:

We strengthed our understanding of the problem space by digging for more information from papers and jounrals about division of labor at home, gender role differentiation, and fairness in relationship. From related research data in China, we found that:

Therefore, we conducted our first round of interview with 3 groups of heterosexual couples, all living in mainland China. And our questions focused on daily task distribution, opinions on parentings and comments of partner's performance on household tasks.

We launched an online survey with questions about common understanding about managing household chores and opinions about them.

According to our survey results, most of the ones doing household organizing work are having trouble to communicate the workload to family members and are willing to try new tools to help them on household management. And all of them believe communication can be crucial to this problem whee they found hard to achieve.

There, we came up with our first version problem statement:

How might we help relationship building through assisted distribution of chores?

There are various types of household management apps available in American market while the Chinese market has little apps to choose from. We investigate some popular chore apps and how they are relevant to our problem space. Then, we moved on to brainstorming design concepts with information in hand.

We identified our target user group from narrowed problem scope to:

We created one persona that summarized typical features of users as design requirements to guide our design directions. 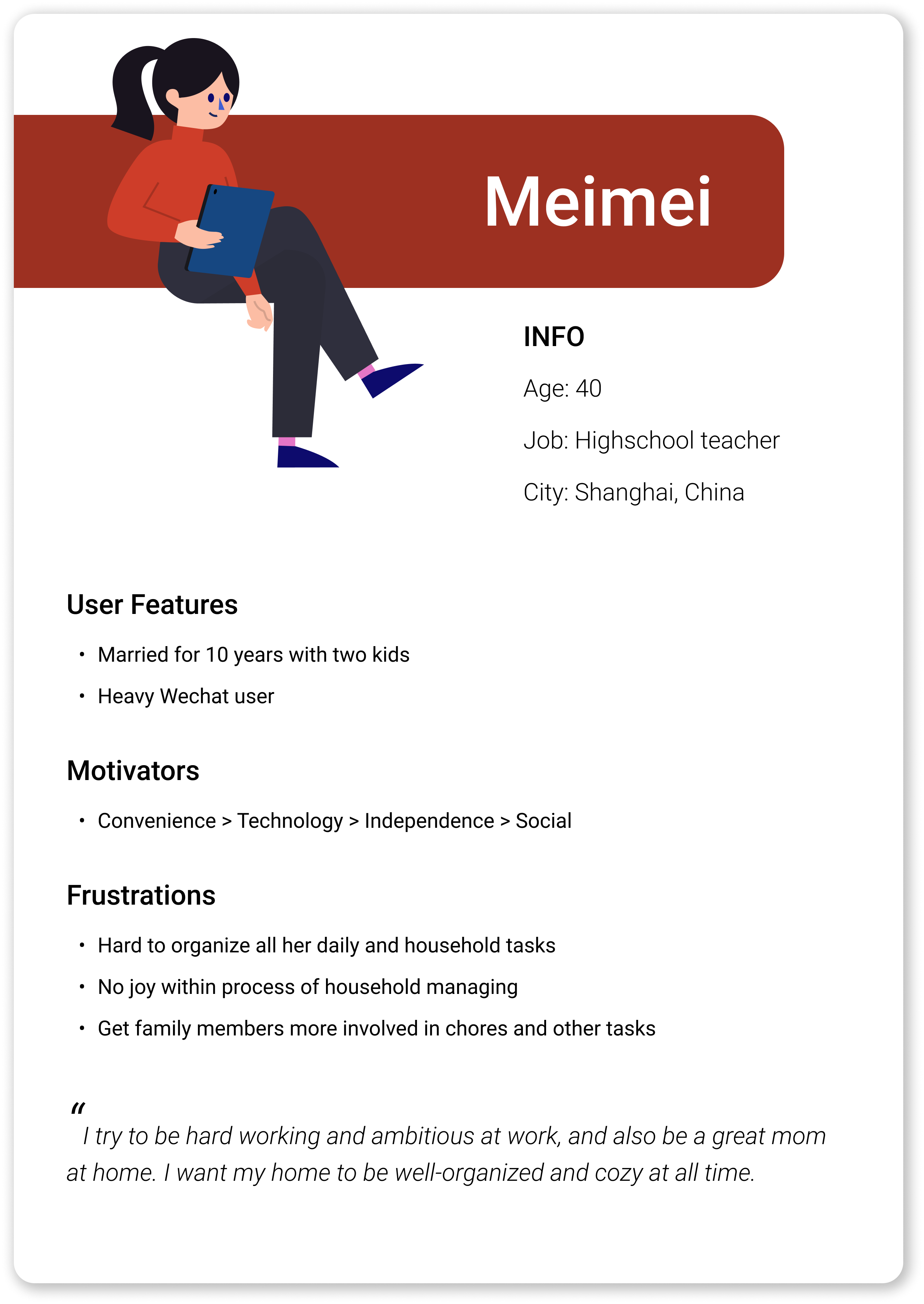 Based on our research, we found that there is a decent need of chore organizing tool for Chinese families to help deal with chore distribution. At the same time, we believed that the WeChat mini program platform would be a great point to develop our design since it had the biggest user population among all apps and its access to personal contacts and connections.

Since we have decided to develop the design on WeChat platform, we conducted a brainstorming session to come up with ideas to tackle several main questions about our problem space.

In terms of efficiency, we want our solution to provide an efficient way to organize chores where it can have features like chore list template, repeatable task list, account sharing. On the other hand, promoting involvement of family members is another focus we have. The ability to quickly share, assign and notify is also crucial for our design. Therefore, we refined our final problem statement to be: how might we help reducethe time and effort spent on organizing and distributing household tasks? 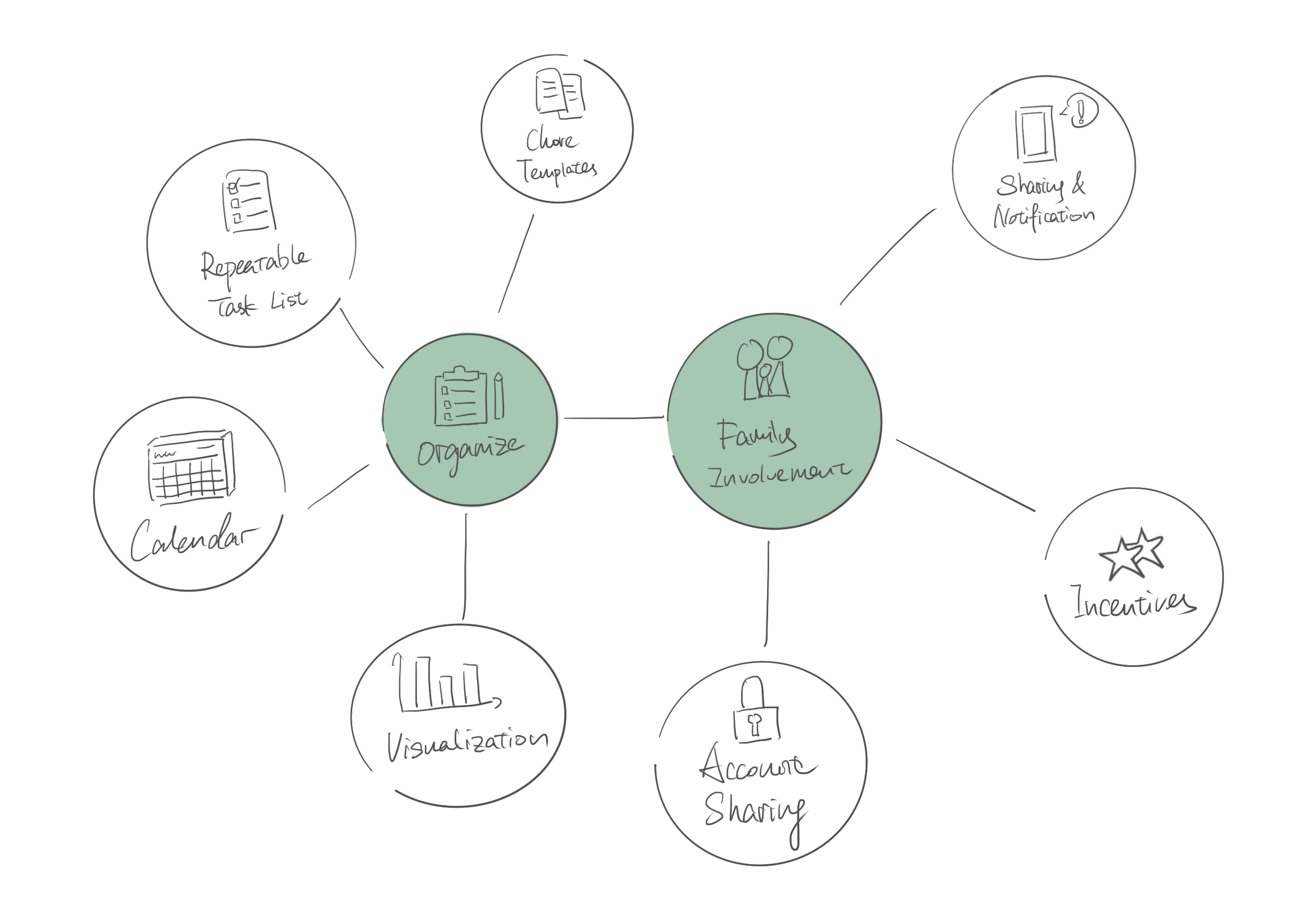 After considering feasibility and discarding some of them, we came up with two design alternatives. 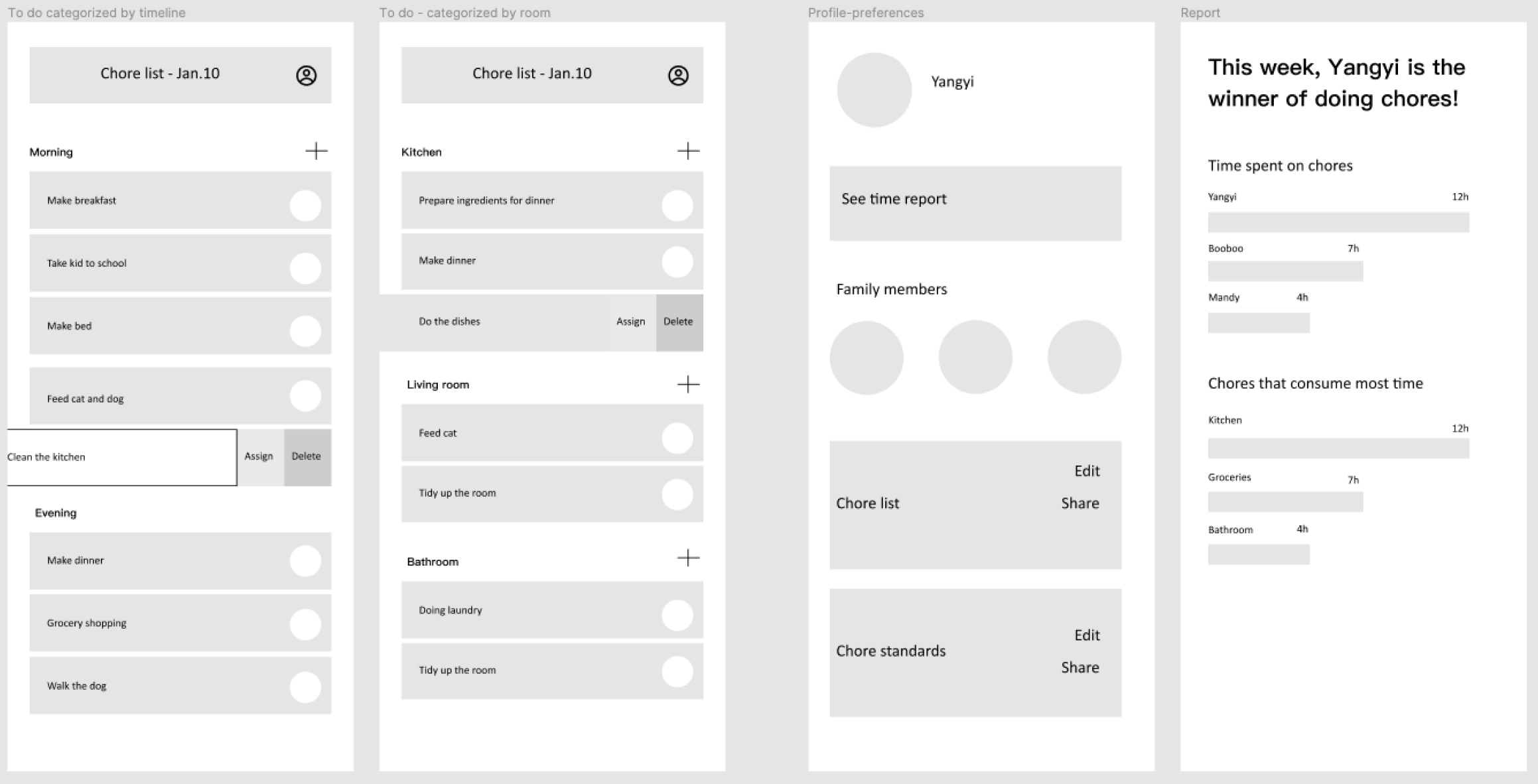 And here, we performed the second round of user interview to get feedback on our design alternatives.

From the feedback of users, We got many valuable insights and reconsidered about these concepts. Eventually, we combined users' favorite ideas and established the final design concept -- help 'the household manager' mange all household tasks with broader task coverage and limited personalizable features.

We started our visual design by creating a low-fi wireframe. The wireframe contains the major functions of our final design concept. Then, we delivered to users for feedback, and make sure our visual design structure can lead users to fulfill their needs.

We asked 3 users and 2 UX experts to test our wireframes. Based on testing results and user feedback, we identified some user flow problems and redesigned some features. And there we got the final hi-fi prototype. 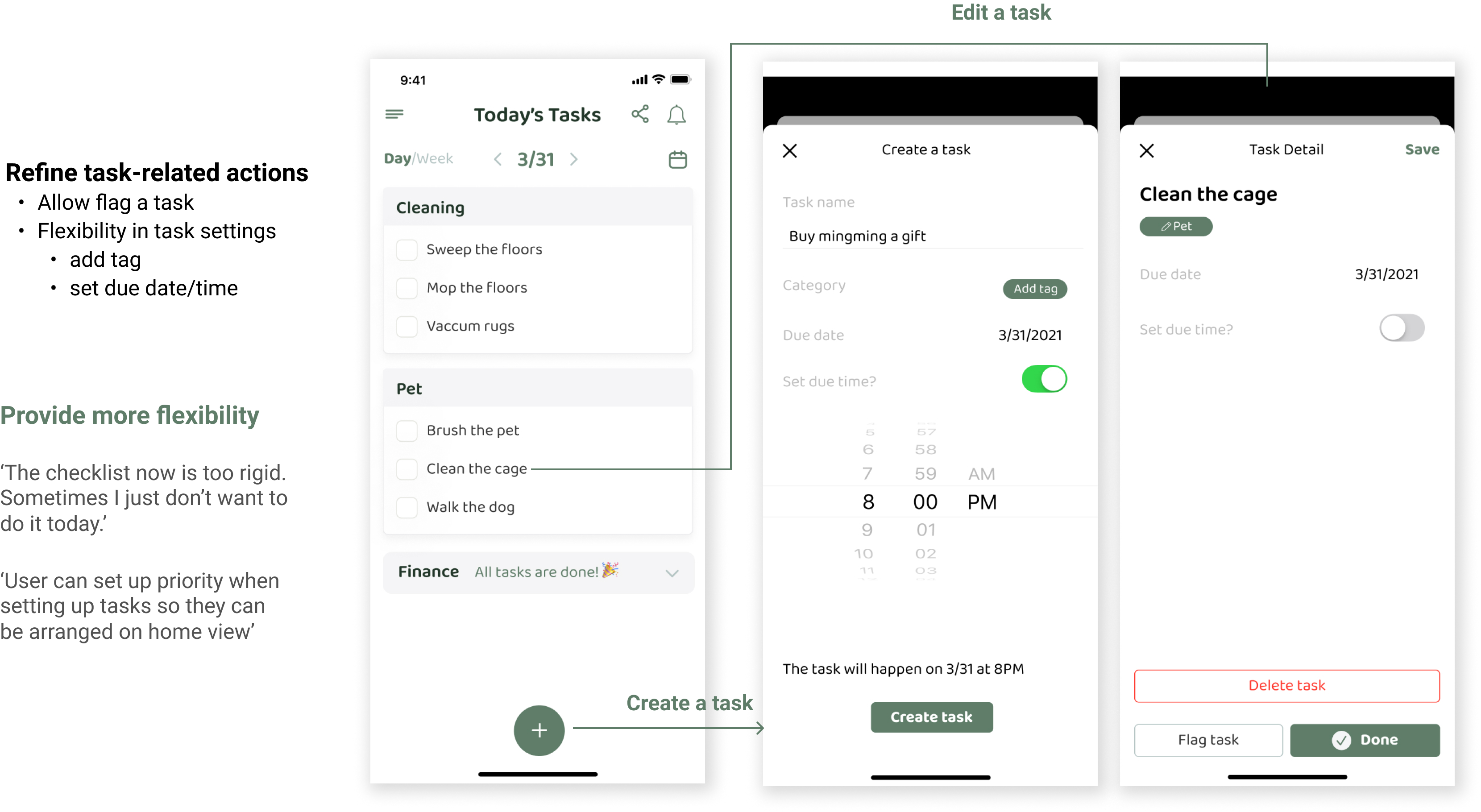 We conducted 4 remote usability testing sessions where we asked our target users to perform 6 key functional feature-related tasks. Users completed the tasks using clickable prototype through Bluejeans screen share and we asked them to think-aloud throughout the testing process. The session also included a post-testing usability rating questionnaire about learnability, perdictability and satisfaction.

And we got many insights and feedback from users to generate some major design recommendation for iteration.

For potential future steps to move our project further, we considered adding possible business models that could push our design to the market and its potential integration with smart home system. Also, we wanted to have another round of iteration on the prototype to improve the customaizability and system consistency of our design.
Yunfei Wang 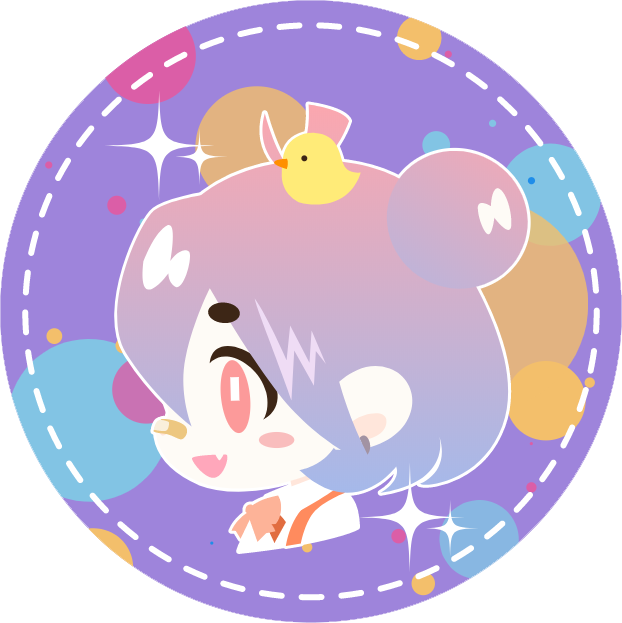 Thanks for checking out my work.

Check out My Resume here, and please feel free to reach out if you'd like to chat!